The Syracuse University Lava Project is a collaboration between sculptor Bob Wysocki (Assistant Professor, Department of Art) and geologist Jeff Karson (Professor, Department of Earth Sciences) at Syracuse University. The goals of the project include scientific experiments, artistic creations, education, and outreach to the Syracuse University and City communities. Basaltic lava, similar to that found on the seafloor and erupted from volcanoes in Hawaii and Iceland, is melted and poured to produce natural-scale lava flows. The project supports a wide variety of scientific experiments engaging faculty and students at SU and volcanologists from other institutions. The natural beauty and particular properties of the lava are the basis for sculpture projects. In addition, lava pours are staged at the SU Comstock Art Building for classes, student groups, and the public. The SU Lava Project brings the spectacle and excitement of a volcanic eruption to Central New York.

Basaltic lava flows cover more than 70% of Earth and large areas of the terrestrial planets and other planetary bodies. Unlike explosive pyroclastic eruptions, effusive lava flows spread laterally as viscous sheets building overlapping lobes with a wide range of surface morphologies and surface textures. The Syracuse University Lava Project creates basaltic lava flow lobes similar in scale to those that occur in nature under controlled environmental conditions. Our experiments allow us to quantify the effects of different parameters that control the behavior and final form of lava flows. The project also supports various artistic, educational, and outreach objectives.

Learn more about the Science of Lava

Inspired by the diverse forms created by natural phenomena, Sculptor Robert Wysocki uses modified furnaces designed for work with metals to create lava flows from re-melted ancient lava. He creates realistic lava flow forms on a range of scales as a form of landscape reproduction or land art. His practice results in both stunning volcanic events and products witnessed by thousands of viewers in Syracuse and elsewhere.

Learn more about the Art of Lava 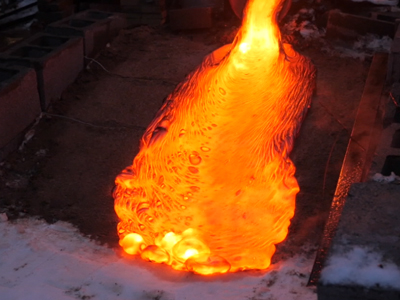 The weather outside was frightful, but the lava pour was delightful. Syracuse faculty and staff gathered together on a bitterly cold January evening to watch as Assistant Professor of Studio Arts Robert Wysocki and Professor of Earth Sciences Jeff Karson turned out 100 pounds of molten basalt rock onto the snow. Read More…

April 13, 2015 Dozens of people gathered Saturday at the University’s Comstock Art Facility for an up-close look at a unique representation of a natural world occurrence. The lava pour was part of the annual Central New York Earth Science Student Symposium (CNYESSS), organized and presented by the student-run Geology Club in the Department of…
Read More News